This is why I STILL endorse Michelle Bachmann for POTUS! 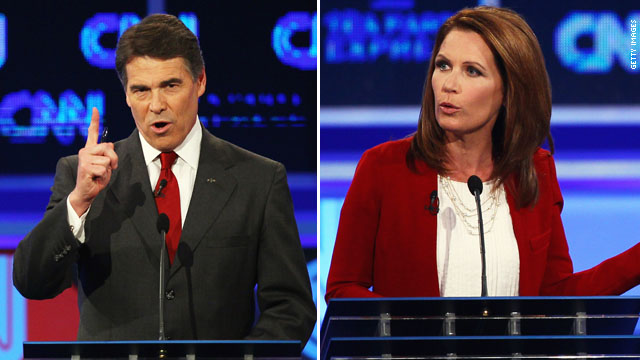 This is the most intelligent thing Michele Bachmann has ever said. Rick Perry is bought & paid for by corporate interests spanning from drug companies to oil companies, and everything in between.

Presidential candidate Michele Bachmann says it is too soon in the process to count her out of  the 2012 GOP nomination race and when voters had a chance to choose in the Iowa Straw Poll she won.
Following the first-ever CNN/Tea Party Republican debate Monday, Bachmann — founder of the House Tea Party Caucus — also said Gov. Rick Perry’s explanation was not satisfactory when he admitted he should not have issued an executive order requiring sixth-grade girls get a vaccine to prevent the human papillomavirus, a virus which can cause cervical cancer.Bachmann said the executive order “violates liberty” and the vaccine could have serious medical consequences of its own. The order was later reversed in court.
“When you have innocent little 12-year-old girls that are being forced to have a government injection into their body — this is a liberty interest that violates the most deepest personal part of a little child,” Bachmann said. “And it violates the parental rights, because what we understand is, again, this was an executive order that mandated that every little 12-year-old girl had to have this vaccination — and then you’d have to opt out.
“Well, parents don’t necessarily have the backing — have the information, the backing to know to opt out — this should be an opt in,” she said. “This is a clearly an example of overreach for government — again, the governor admitted that this was a big mistake.”
Bachmann said the problem with the mandated vaccine is that “a little girl doesn’t get a do over — once they have that vaccination in their body, once it causes its damage, that little girl doesn’t have a chance to go back.”
“So you can’t just say you’re sorry — when you’re president of the United States, you don’t get a mulligan — you don’t get a do over,” she said.
Later on Fox News, host Greta Van Susteren noted Perry’s former chief of staff now works for the drug company that manufactures the vaccine and Merck contributed about $6,000 contribution to his campaign.
“Well, this is what people hate about politics — when you have someone in a position of power, whether it’s state government or the federal government, and they have political donors — and then they use their position of power to benefit those political donors,” Bachmann said. “He mentioned the drug company — it’s the Merck drug company — and the governor’s former chief of staff is chief lobbyist for this big drug company. And he mandated, again, that every girl would have to have this particular drug.”

Federal Reserve needs to go, Santorum is right…dramatic improvement of Obama economy just to be a disaster..haha

Bachmann on the Fed: Unlimited Power over the economy, make em squeak…TOTALLY AGREE, Audit…then SHUT IT DOWN, bring back Gold Standard!

PERRY HPV Vaccine Question His Obvious ties to Merck Pharma is a BIG Problem his choice to do it, indicates a nauseating hubris #CNNTeaParty

When Americans truly learn about the elements in the HPV Vaccine that will STERILIZE those who get it – health rhetoric = LIES! #CNNTeaParty

Ron Paul Explains difference between Military and Defense Spending… NO CONSTITUTIONAL AUTHORITY TO BE THE WORLDS POLICEMAN! #CNNTeaParty

Bachmann would bring the Founding Documents with her to the White House…the Obamas have been using them as Toilet Paper. #CNNTeaParty

BEST moment of the Debate: youtube.com/watch?v=xIC_vc

In response to Michelle Malkins Tweet: @michellemalkin AGREED Merck has some serious hell to pay for what they have done: http://bloggingmothersmagazine.com/2011/08/31/american-style-terrorism/