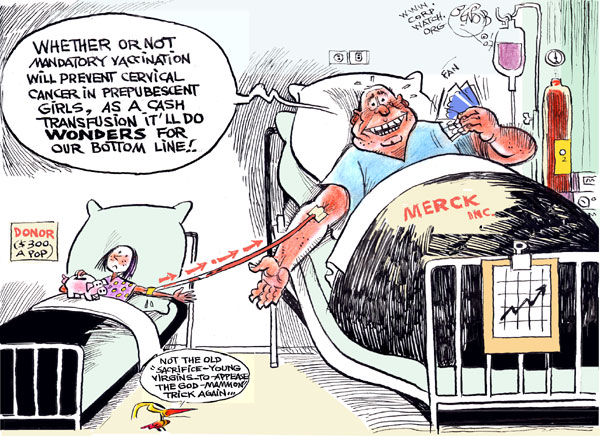 Dr. Blaylock is one of many physicians in the United States who has stood publicly for nutritional healing therapies over Drug Therapies.  This interview is a fifteen minute smackdown of probably the worst example of Big Pharma Deception and Fraud that has ever hit America.

Dr. Blaylock is a board certified neurosurgeon, health practitioner, author, lecturer, and editor of The Blaylock Wellness Report

“He talks about the dangers of Gardasil and the upcoming flu vaccination season and the threat it poses to unsuspecting Americans who are inundated with flu vaccination propaganda on a daily basis.

Gov. and GOP presidential candidate Rick Perry is currently enveloped in controversy over his decision in February of 2007 to issue an executive order mandating that Texas girls receive the HPV vaccine.

In 2009, Blaylock told Newsmax that the 14,000 reported incidents of side effects is an underestimation. “Multiply the number of incidents actually reported by ten and you’ll get an accurate number,” he said.”

The Dangers of Gardasil with Dr. Russell Blaylock 1/2

The Dangers of Gardasil with Dr. Russell Blaylock 2/2