I was talking to one of the Moms before our closing performance last night.  She is also a Homeschooler and very educated about political ideology and controversies.  She had no idea how political the stage show was and used her girls performing as orphans in the show as an opportunity to have her teenage children conduct some research on FDR and his New Deal and what it did to the American People during the depression.

Many historians refer to the depression that occurred in 1921 as being just as devastating as the stock market crash that hit in 1929.  And some historians claim that FDR’s New Deal extended the depression by a decade.

“In order to make sure that this version of events sticks, little, if any, public mention is ever made of the depression of 1920–1921. And no wonder — that historical experience deflates the ambitions of those who promise us political solutions to the real imbalances at the heart of economic busts.

The conventional wisdom holds that in the absence of government counter cyclical policy, whether fiscal or monetary (or both), we cannot expect economic recovery — at least, not without an intolerably long delay. Yet the very opposite policies were followed during the depression of 1920–1921, and recovery was in fact not long in coming.

The economic situation in 1920 was grim. By that year unemployment had jumped from 4 percent to nearly 12 percent, and GNP declined 17 percent. No wonder, then, that Secretary of Commerce Herbert Hoover — falsely characterized as a supporter of laissez-faire economics — urged President Harding to consider an array of interventions to turn the economy around. Hoover was ignored.

Instead of “fiscal stimulus,” Harding cut the government’s budget nearly in half between 1920 and 1922. The rest of Harding’s approach was equally laissez-faire. Tax rates were slashed for all income groups. The national debt was reduced by one-third.

The Federal Reserve’s activity, moreover, was hardly noticeable. As one economic historian puts it, “Despite the severity of the contraction, the Fed did not move to use its powers to turn the money supply around and fight the contraction.”[2] By the late summer of 1921, signs of recovery were already visible. The following year, unemployment was back down to 6.7 percent and it was only 2.4 percent by 1923.”

As I talked to Barbara about the assumptions of the show and how the original cartoonist who created the Little Orphan Annie strip was a free market conservative who would have been very upset to see what was done to his characters in the BIG Government solutions to the depression that the show presumes solved everything, I was struck with the thought that tens of thousands of little girls have potentially performed this show over the past 35 years, and with the new revival on Broadway last year, Annie fever will only get revved up to a much higher level as we go forward.

But the truly crazy thing to me is that I LOVED performing the show.

Those songs are embedded on my heart.  I have sung them since I was a pre teen, and as we closed the show with a cast performance of Tomorrow last night, I found myself breaking down emotionally with how uplifting it all was…”The sun will come out tomorrow”… yadda yadda yadda.

Hopefully my next show will be Ayn Rands Night of January 16th to even me out politically with my theatrical efforts.

I am grateful for the friendships formed during the production of this show and the extra time I was able to spend with Jeffrey, who will be leaving on his mission next month.  Musical Theatre is a magical place to hang out, and the professionalism of the cast, crew, and orchestra was truly amazing.  It was a level of Community Theatre that I did not know existed.

Here are some photos and videos! 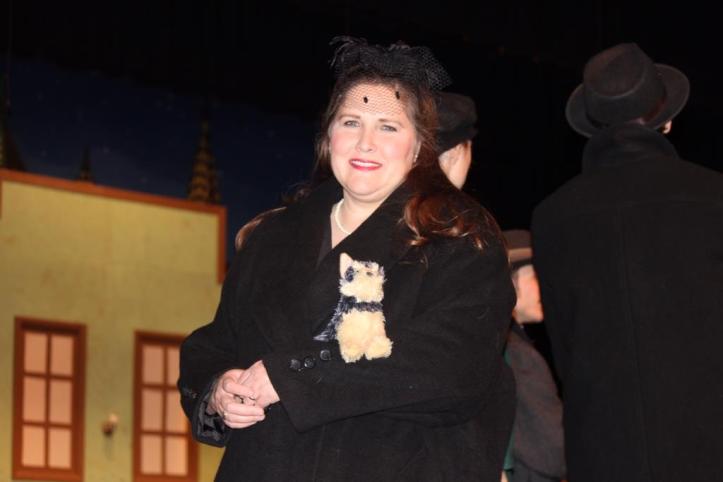